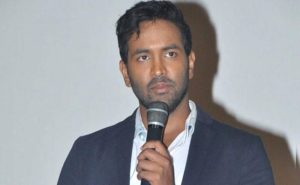 Everyone in Tollywood enjoys the way Megastar Chiranjeevi and Mohan Babu shares their camaraderie everywhere. They themselves call it a Tom and Jerry relation, and their friendship is quite adorable we must say. But then, Mohanbabu’s son Vishnu says that he feels jealous of them.

Having all the due respects for his father and Megastar, Vishnu says, “I feel quite jealous of their relationship because I’m always wondering if I will ever get such a friend in my life who will be there for me when I turn 60 years old. They came from nothing and became superstars, they have created a platform for us, they fight and hug, and remain best friends”.

That’s true, one has to respect their friendships and make friends for life rather than just doing friendship for the sake of it. So who happens to be good friends of Vishnu in the film industry? “I don’t go to parties, but keep regularly in touch with Kalyan Ram and Prabhas. Nithin is also a good friend of mine, while I share bonhomie with Sumanth and Gopichand as well” Vishnu says.