Advertisement
Home News How many ‘My Home’ scams do Telugu people need to witness? 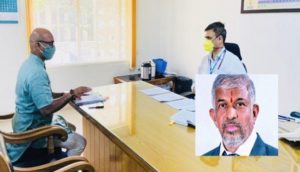 There have been numerous allegations on the TV9 Rameshwar Rao alias ‘My Home Rameshwar Rao’ on the group’s irregularities in mining that caused a loss of hundreds of crores to the exchequers.

The Congress and BJP leaders are quite determined to put Rameshwar Rao behind bars as soon as possible considering the scale of the scam he is involved in and probably lead the group towards it.

It is rather shocking to the Telugu people in the two states as the ease at which the ‘My Home’ group’s management of two government’s of Telugu states occurred and committed a massive scam by giving false reports to the centre without any fear tells us the sad state of governance in two states.

No one has any idea about the drastic progress of the ‘My Home’ and the group has minted crores of rupees within no time and the people are really worried about the plight of their elected governments as a new scam is being erupted in both Telangana and Andhra Pradesh daily and no accused is being convicted so far. Will there be any stoppage to this routine?

Director Sukumar to get a huge amount as remuneration for the...

UP’s Hathras Police drawing a lot of scrutiny for covering up...