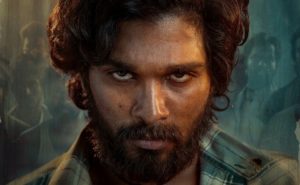 Stylish Star Allu Arjun’s upcoming flick in the direction of Sukumar released their first look on the eve of Bunny’s Birthday. Allu Arjun was seen in a RAW and RUSTIC look as the film was titled ‘Pushpa’

Allu Arjun is going to don in the role of Sandalwood Smuggler named Pushpa Raj. In the posters, Arjun sports a bushy beard and looks rough while he gives an intense stare into the camera. The green coloured check shirt he wore in both the posters highlighted his rugged and intense look a bit more.

Reportedly, Mega Star Chiranjeevi called the most talented director Sukumar and said that he was deeply impressed with the first look. He also called bunny to wish him on his birthday and admired him for his selection of this typical massy role.

Pawan Kalyan who is also aware of the plot in which Allu Arjun will be seen as Lorry Driver and Rashmika Mandana playing the role of his wife is pretty very much elated with the first look. He also called Bunny and congratulated him on this update.

This movie was set in the backdrop of Seshachalam forests. It is being bankrolled by Mythri Movie makers and Rockstar DSP will score music for AA20.