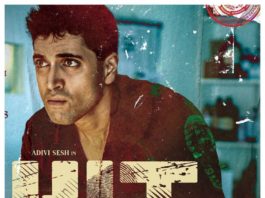 The Telugu crime thriller genre took a new turn with the success of “Hit”. Seeing the craze for it, the makers of “Hit” have decided to make it a franchise and thus came the second installment “Hit 2: Second Case.” Adivi Sesh has already become popular for this kind of thrillers. So, naturally, “HIT 2” generated excitement and buzz.

Let’s find out how this film has shaped up.

Story:
KD (Adivi Sesh) is a police officer in Vizag’s Homicide Department. He is in a relationship with Aarya, a social worker (Meenakshii Chaudhary). Sanjana, a pub employee, is brutally murdered. KD and his team discover that the only head is Sanjana’s, and the rest of the body parts belong to different women. A serial killer is on the loose.

KD’s further investigation reveals that many women were also killed, and all of the women were linked to a women’s organisation that Aarya is assisting.

Who was responsible for such heinous crimes? Why has the killer developed such disgust for women?

Artistes’ Performances:
It has already been established that Adivi Sesh possesses the skills and personality required for such thrillers. As an investigative officer, he not only fits in well, but he also performs admirably to keep us engaged throughout. He also controls the film at times.

Meenakshii Chaudhary’s character is forgettable. Komalee Prasad’s role as Adivi Sesh’s assistant is neat. Suhaas is quite impressive. The character of Rao Ramesh does not have much impact.

Other actors, such as Harsha Vardhan, play important roles in the story but are given limited screen time.

Technical Excellence:
The film is set in Vizag, and instead of focusing on the usual beauty of the beach city, cinematographer S Manikandan captures the mood required for crime thrillers. His work is excellent.

The songs (composed by Sreelekha and Bobbili) aren’t enjoyable, but the background music by John Stewart Eduri is. It sets the right tone and adds a touch of eeriness. The editing is sharp.

Drawback:
The usual tropes of thrillers
Lack of exceptional sequences

Analysis
“HIT 2” is the second instalment in the series, and a third is on the way. So, director Sailesh Kolanu has created a universe for the franchise by including sequences from the first film and ending the film with a lead to the third. This demonstrates how confident the director and team are in the content they have in their hands. The film, true to their confidence, holds our attention until the end, thanks to its gripping narrative and concise length.

The film, like the first, revolves around an investigative officer attempting to solve a murder case. It’s not just one murder here. The protagonist’s mission is to find a serial killer who only kills women. So, the film begins with the establishment of the protagonist’s job in Vizag and a gruesome murder.

The film follows the protagonist as he attempts to solve the case while also suspecting innocent people. One interesting thing the writing and directing team did with this film was to reveal the killer early on. However, director Kolanu has successfully kept our attention until the end in order to reveal the true identity of the killer.

Despite some repetition in the screenplay, the intensive narrative keeps the audience’s attention. The second half of such thrillers is crucial, and the film succeeds here. The first clue of dental marks in the first murder is correctly linked in the end.

The film has one interesting episode that keeps the audience interested. It is a suspect’s encounter. This section is handled superbly.

On the negative side, the film contains some disturbing images. These images are both gruesome and graphic violence. A close depiction like this should have been avoided. And the thread connecting Meenakshii and Adivi Sesh is uninteresting. Meenakshi’s mother role serves little purpose. Rao Ramesh’s role is also underdeveloped. There are also some loose sequences.

Overall, “Hit 2” is a solid investigative thriller that checks all the boxes. Despite its flaws, the film maintains viewer interest throughout. It nearly hits the target.