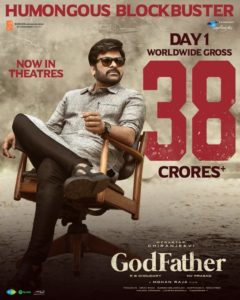 Megastar Chiranjeevi’s mass and political action entertainer GodFather where superstar Salman Khan played a mighty role was released on Dasara to a super positive response from all corners. Critics, fans as well as the common audience gave a blockbuster verdict for the movie. Director Mohan Raja is also winning appreciation for showing Chiranjeevi in a completely different character.

GodFather has opened well at the box office with 38 Cr worldwide gross on its first day. It’s an enormous opening, considering limited release in all the areas, and regular ticket prices with no hires.

The film is exceptional in mass circuits and the numbers are too good in A centres as well. Of course, the megastar’s craze is not restricted to a particular class or zone.

GodFather will enjoy the long and extended weekend holidays (4 more days) and we can expect huge box office numbers during the Dasara holidays.