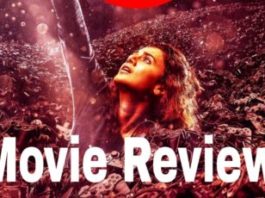 Game Over is directed by Ashwin Saravanan of Mayuri fame. Taapsee Pannu played the female lead in it. It is a mix genre film targeted at the multiplex crowds.

Swapna (Taapsee) is a video game developer who is yet to recover from a personal tragedy. She develops suicidal tendency while a serial killer is on the loose. She also gets an information that she could be haunted by a spirit that enters her body in the most bizarre fashion.

Taapsee has come a long way from playing a typical Telugu cinema heroine that runs around in skimpy clothes. Bollywood has given her an opportunity to find her true potential and good scripts are going in search of her. Taapsee is too good in the lead role in Game Over. She has excelled in getting the complex emotions right. Vinodhini Vaidhyanathan as her trusted maid is impressive. Anish as the therapist is aptly cast. Mala Parvathy is good in a limited role.

Ashwin Saravanan has came up with a very original idea that has been executed tremendously well, especially in the latter half of the movie. The same cannot be said about the initial setup that moves at sluggish pace and too much thrown into a limited run time. That makes the screenplay confusing at times. He has not only extracted terrific performances from his principal star cast but also brought out the best from his technicians. This is a technician’s film with every key member from the technical crew raising their Game. Cinematographer wins the trophy though.

Game Over is a thriller with a different approach to it. We had seen n number of thrillers and horror films in the past, but Game Over is different from everything. It has a unique storyline and a clever storytelling that keeps the viewers invested in the film. The protagonist is a video game developer who plays video games in her free time. She plays Pacman game all the time trying to beat her previous best score. (Trivia: This game has three lifelines, which has a major role to play in the screenplay as well).

The protagonist is afraid of darkness as something very bad happened to her in the past. Now, she gets an information that she has been inked with someone’s ashes mixed in the tattoo ink. Does that mean she is possessed by a spirit? The tattoo keep intervening in her life at key points. But there isn’t enough evidence of a spirit’s presence around her. Then there is a serial killer who targets young women. The same person who also killed the person whose ashes are mixed in the tattoo ink that was used for the protagonist.

The protagonist is given hints about everything including the serial killer and then the Game begins. Now she has to face the serial killer who invades her home. Is he for real? Or is she dreaming? Or is she finding a way out of the depression? The film ends on a happy note, but it is also open ended, leaving many questions about what actually happened. The real thrill is guessing what would have happened in the film after it is over. This is inception level of screenplay, which will not appeal to majority audience. Critics will give it the thumbs up, but commercial success isn’t easy for films like these with very limited appeal.

Game Over is an intelligent thriller that keeps the viewers guessing all through. However, it takes its own sweet time to enter the thrill zone. First half is sluggish although it is engaging in parts. Bur the second half is slick and effective.