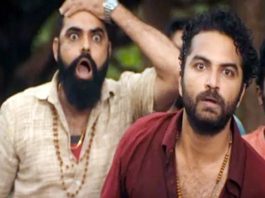 The raw and interesting trailer of ‘Falaknuma Das’ has made everyone sit up and take notice of this movie that is directed by actor Vishwak Sen.

Let’s find out whether the film lives up to the promise.

Story:
Das (Vishwak Sen) idolizes a local rowdy Shankaranna in his area Falaknuma, an area in old city of Hyderabad from his childhood and creates a gang of his own in his teens.

The film narrates incidents of his life in 2005 (his college days and his first love with a German girl) moves to 2009 and the present day.

After breaking up with his first girlfriend he takes up mutton business that leads to gang wars and he also gets incriminated in a case. This police case puts him in huge financial and mental stress and he breaks up with his second girlfriend.

How he comes out of this mess with the help of his gang and his uncle-like friend (Uttej) and also finds another girlfriend Joya (Saloni Sharma) and finally settles in life forms the story.

Artistes’ Performances:
Other than the lead actor Vishwak Sen and Uttej, the film has all newcomers playing most of the roles in the film.

Even Tarun Bhaskar (director of ‘Pelli Choopulu’) gets to play a lengthy role of a cop and he pulls it off.

Vishwak Sen in the lead role steals the show. He gets the body language of gully boy and the lingo perfect.

Uttej has got meaty role and he kills it with his natural acting. Among the three girls, Saloni Sharma looks better.

Technical Excellence:
The film is shot in art movie style and in real locations. Seems to have been shot mostly in the old city. The cinematography is good. Production design is appreciable.

Pace of the movie is not perfect. At 150 minutes, it makes a tiresome watch after a point.

Vishwak Sen, who acted as one of the lead stars in Tarun Bhasckar’s second film “Ee Nagaraniki Emaindi”, has seen potential in remaking Malayalam’s cult hit “Angamaly Dairies” and changed the backdrop to Hyderabad’s old city.

Besides directing, Vishwak Sen also plays the lead role in this movie. The film was made with all newcomers and it won critical acclaim for its depiction of the local culture, gang wars and terrific direction.

Vishwak Sen has tried to be faithful to the original movie but he has erred in mainly two points – getting the gang wars right and transporting the original feel here.

Gang wars in mutton business looks completely unrealistic. We have not heard of or seen such fights in this business in Hyderabad though the huge market for red meat does exist in old city. Vishwak Sen also prolongs many unnecessary scenes with no purpose.

The long fights, the lengthy scenes and unengaging romantic episodes have marred the film’s mood. In the original movie too, all these elements are there but the Malayalam director captured the romantic thread quite well.

There are couple of funny dialogues and the authentic Telangana local accent glues us to the screen in some scenes. The following scenes again kill the mood.

There is no consistency. First and foremost, the story of gang wars for mutton business in no way connects to us as there is no local touch. Vishwak Sen just transported the same scenes from the original to here without caring whether they have any roots here.

The climax sequences are not handled well at all.

Then what works? Well, the director and actor Vishwak Sen begins the movie well and sets up the mood. He is quite relatable in his raging mood. Dialogues like ‘Falaknumala Podduna Lechinama Bara Baja Tinnama..” generate good humor. Uttej’s natural acting and Tarun Bhasckar’s episodes are quite engaging.

Despite some sparks here and there, the film in totality becomes a pale version of the original Malayalam movie and the set-up is completely unfamiliar and looks unrealistic.

After a time, you don’t see anything but people drinking (Mandu) and eating non-veg (Mutton) as if this film all about this activity.

KCR to release water from Kondapochamma on May 29