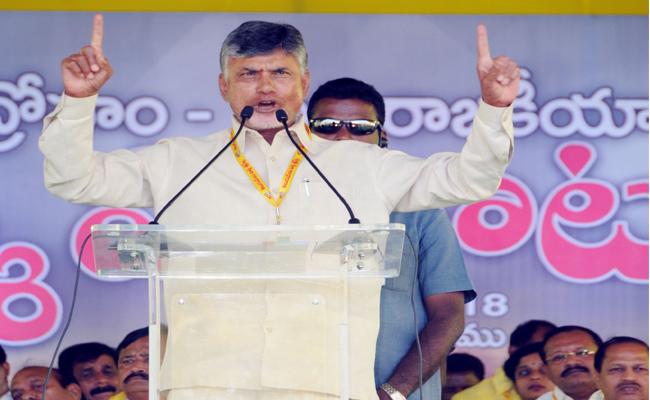 There are to options in front of Chandrababu Naidu to protect himself and his associates: One is to retain power in Andhra Pradesh. This is the primary objective.

If the TDP loses in Andhra, there is absolutely no doubt that Chandrababu and his associates are in for big trouble.

YSRCP leaders led by YS Jagan had been subjected to a lot of harassment by the TDP these five years and they will return it in full measure to Chandrababu with ‘interest’.

There is a strong possibility of a CBI inquiry against Chandrababu Naidu and his men if the YSRCP comes to power.

In order to safeguard himself against such possible outcomes, Chandrababu needs to be on good terms with the Centre. This is his second option.

The BJP was never favourably disposed towards the TDP which makes it imperative for Chandrababu that an anti-BJP coalition led by the Congress forms the government.

It is for this reason that Chandrababu has launched a tirade against the BJP and trying his best to ensure that Modi does not come to power again.

If Jagan wins in AP but the Congress comes to power at the Centre, they can forestall any inquiries against Chandrababu.

If Chandrababu wins in AP and the BJP at the Centre again, once again, there will be no support forthcoming to Andhra Pradesh.

The utopian scenario for Chandrababu is if he wins in Andhra and the Congress at the Centre. Any takers for this line of thought?

Meanwhile, Chandrababu continues his diatribe against Modi on a daily basis ad nauseam. Will his efforts yield any fruit?