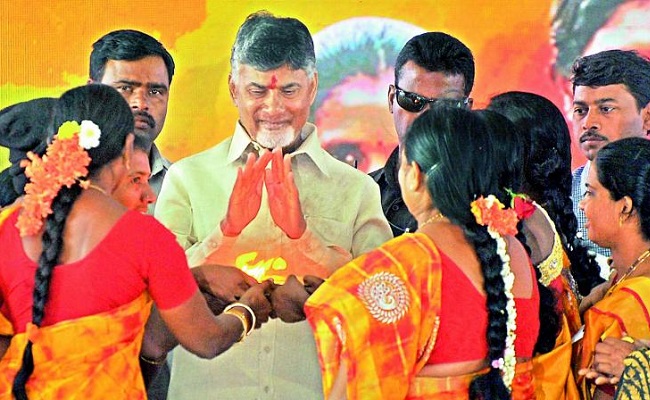 The entire TDP is praying that the ‘Pasupu –Kumkuma’ scheme launched by Chandrababu Naidu that was originally announced on Jan 25, 2019 will tilt the balance in its favour at the polling booth hen counting takes place on the 23rd of this month.

Rs 10,000 will be paid to all eligible women of Self Help Groups and DWACRA and smart phones will also be provided to them. Approximately, 93 lakh women will benefit from this scheme and will cost the State around Rs 9400 crore.

Although the State government does not have the funds, it promised to make the payments by borrowing from Central Agencies.

Chandrababu Naidu cleverly ensured that the payments via cheque were made to the beneficiaries, right on the eve of elections in Andhra Pradesh.

The Party believes that the high percentage of women turning out in large numbers to exercise their franchise till late into the night is an indication that the women voted for them because of this scheme.

With all due respect to the TDP though, it is equally possible that people waited in queues for long periods of time to cast their vote because of the high level of anti-incumbency.

This election has been especially tough for Chandrababu Naidu as he has completely lost credibility.

Whether it be the ‘real estate’ venture called Amaravati, the failed ‘loan waiver’ scheme or his horrifying doublespeak over the SCS issue, he has lost the trust of the people.

Given such a high-level of anti-incumbency, will this one scheme by Chandrababu be enough to catapult him back to power? The TDP thinks so!

Besides, there is no guarantee given his recent track record that Chandrababu will make the payments punctually in future.

The people would also have taken this aspect into consideration which would mean that the women gleefully accepted the payments and then voted for the YSRCP.

In 2014, the TDP needed 6 runs off the last ball and contrary to all expectations; Chandrababu got a top-edge that sailed over fine leg into the stands.

Now, the situation is the same and TDP fans are desperately hoping that Chandrababu will once again clear the field. But miracles don’t occur frequently or else they wouldn’t be called miracles.

The last ball this time can easily be a replica of the IPL final between Chennai and Mumbai with Naidu in yellow representing the defending champs.

But there’s a silver lining for Chandrababu after all. He frequently keeps complaining that he is working so hard for the people that he cannot find even the time to play with his grandson.

Should the TDP lose on May 2, Chandrababu will have all the time in the world to fulfill this desire of his and what’s more, he can also catch up on the episodes of the serial ‘Pasupu Kumkuma’ on Youtube that was aired on Zee Telugu some years ago.