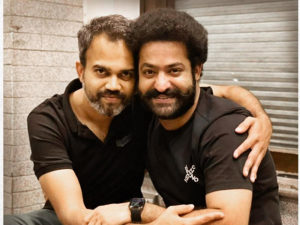 As we know, Jr NTR is currently getting ready to start his next pan-Indian project with star director Koratala Siva. It is his 30th film but the focus of fans is entirely on his 31st film which will be made under the direction of Prasanth Neel. The announcement poster went viral during the time of its release and there are massive expectations on this project already.

Prasanth Neel gained the image of a pan-Indian director after ‘KGF’ franchise and he planned a complete action thriller with NTR and there is a crazy rumour going around regarding this film. It says that Prasanth Neel penned a periodic drama where hero and villain characters will be portrayed by NTR himself. Knowing the phenomenal actor NTR is, the ‘KGF’ director reportedly penned two strong and complex characters. As we have seen in ‘Jai Lava Kusa’, Tarak pulls off any kind of role with ease and if the rumours have anything to by, fans of NTR will be having a blast on the screen.

NTR is a mass hero and Prasanth Neel is known for his action flicks. Everyone is expecting a full-length mass action entertainer which becomes another addition to NTR’s successful streak at the box office.

Coming back to #NTR30, Anirudh will be giving the music while it is produced jointly by Yuvasudhaa Arts and NTR Arts banners. Ratnavelu is the director of photography while Sreekar Prasad is the editor. Koratala Siva is aiming to make a strong comeback with this film after a debacle like ‘Acharya’.

Watch A new challenge for the housemates | Bigg Boss Telugu 6