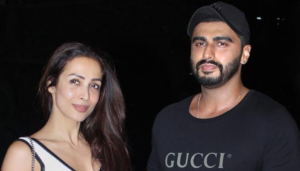 B-town star Arjun Kapoor is presently busy with his upcoming historic drama Panipat’s shooting. Simultaneously, he is also all set to start his another film opposite Rakul Preet and the makers have announced the news just a couple of days ago. Now, with a busy professional life, Arjun’s personal life is also as busy as it is.

Arjun’s rumoured girlfriend 45-year-old Malaika Arora, in of the recent interviews, opened up about her beach wedding plans fantasy with Arjun. Parallel to that, Arjun too spoke in another interview that he and Malaika don’t want to get married. Well, the couple’s statements contradict now and are raising a few eyebrows.

On the one hand, Malaika says that her beach wedding will be full of white theme and will wear an Elie Saab gown. On the other hand, Arjun doesn’t picture himself getting married to her. Also, Malaika is already dreaming of having her girl gang(Kareena, Karishma, Amrita) as her bridesmaid.

Arjun further added that if it ever happenes, he will let the media know, implying to the wedding rumours. Malaika, who was once married to Salman Khan brother Arbaaz, divorced him and later found love in Arjun Kapoor, who is much younger to her. They duo have made constant headlines for their PDAs and romantic getaways.