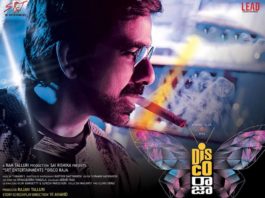 A frozen body is found in Ladakh and the scientists uses it for their experiment and brings it back to life. The dead body is of a don named Disco Raja (Raviteja) who died thirty five years ago. A family is waiting for a missing person named Vasu (Raviteja). How are they two connected? Who killed Disco Raja?

Raviteja tried to be as energetic as Disco Raja, but he couldn’t hide his age in close up shots. His performance is okay as the music loving gangster. None of the female leads got a decent enough role to play. Payal Rajput is okay in retro avatar. Bobby Simha’s character is poorly etched and he is totally wasted despite putting in best efforts. Vennela Kishore’s comedy works here and there and Sunil is a surprise package. But his character is underdeveloped.

VI Anand’s idea is impressive. It has the makings of an interesting science fiction thriller. But it is tweaked to make it suit to the body language and screen image of Raviteja. This didn’t come out well as the director lost focus on details and messed up the screenplay. It is neither an action film nor a comedy.

Thaman’s disco based retro music is the mainstay of the film. He has given a chartbuster song and the background score is simply superb. Cinematography is good and the production design makes it look authentic. Editing is uneven. Production Values are topnotch as the film is made on a high budget with quality visuals.

The film starts off as a science fiction with an interesting point stressing upon the stem cell storage. The mystery around the lead character is built through various sub plots, but the behavior of the protagonist after coming back to life seems odd. There is a desperate attempt for comedy which seemed quite unnecessary and diluted the interest generated at the beginning. The pace picks up towards the intermission scene where the true identity of the protagonist is revealed.

There is ample scope for an interesting second half, but the characterization of Disco Raja lacked proper vision. There is no need to stress so much on the ‘Disco’ element, but it seemed to be a desperate attempt to give it an identity. The late seventies getups are odd including Raviteja’s. Thankfully, it is restricted to few scenes as Disco Raja grows into a powerful gangster. The gang wars shown are not effective as the villain’s chapter is pretty limited.

The Helen Chapter with the romantic episodes of Raviteja and Payal Rajput are boring except for a chartbuster song. Director’s attempt to make it an interesting climax by pulling off a familiar twist isn’t effective enough. Such twists are done to death in gangster flicks. There are more than a couple of twists, but none of them evoke any interest due to poor narration and marathon boring sequences.

The futile attempt to make it a whacky comedy film backfired big time. The film doesn’t maintain any mood for a considerable amount of time. It keeps on fluctuating from one mood to another without any interesting stuff going on the screen. Disco Raja comes off as an interesting idea that is killed because of half baked treatment and execution. Raviteja is trying his best to do something different but is getting letdown by the directors.