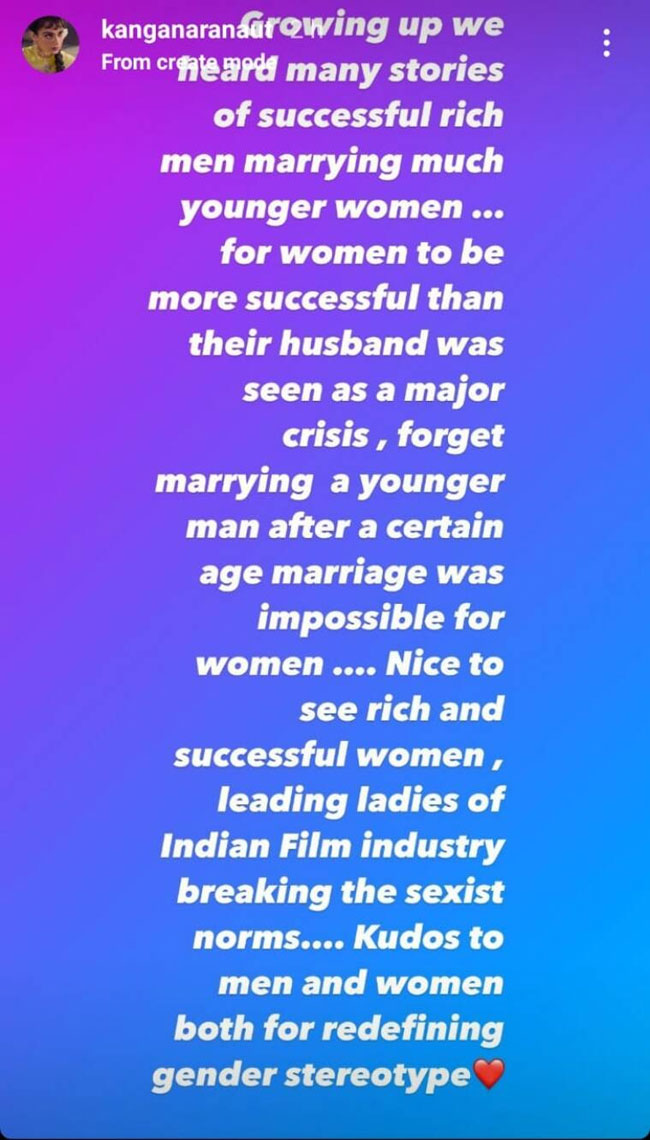 Bollywood love birds Katrina Kaif-Vicky Kaushal’s wedding is the much-talked-about issue in the country right now. Be it the elaborate arrangements at the venue or the security arrangement or the wedding guest list, any news related to the wedding is grabbing the attention.

Amid this, controversy’s new favorite child Bollywood actress Kangana Ranaut’s Instagram story is doing rounds on social media. The story is said to mention Katrina Kaif and Vicky Kaushal who are all set to take their relationship to next level by tying the knot.

In one of her stories, Kangana Ranaut had lauded men and women for redefining the gender stereotype. The Queen actress expressed her happiness for women who are rich and successful are breaking the sexist norms by tying the knot with the younger men. It’s nice that the leading ladies of the Film Industry are breaking sexist norms, she said

Kangana Ranaut tried to differentiate how women being successful than their husbands is seen as a crisis and how it is difficult for women to get married after reaching a certain age. She also mentioned how we hear stories about successful men who are rich marry women younger than them. Though Kangana Ranaut did not mention Katrina or Vicky in her story, it is believed that she is mentioning the wedding without taking any names.

â€œGrowing up, we heard many stories of successful rich men marrying much younger women… For women to be more successful than their husband was seen as a major crisis, forget marrying a younger man after a certain age, marriage was impossible for women …. Nice to see rich and successful women, leading ladies of Indian film industry breaking the sexist norms…. Kudos to men and women both for redefining gender stereotype,” Kangana Ranaut’s Instagram story reads.

Katrina Kaif and Vicky Kaushal will have a wedding ceremony that will last for three days. A famous hotel in Rajasthan was picked for the high-profile wedding and the arrangements for the same were started already. December 7-9 are said to be the wedding dates and selected celebrities across the industries were invited for the wedding.