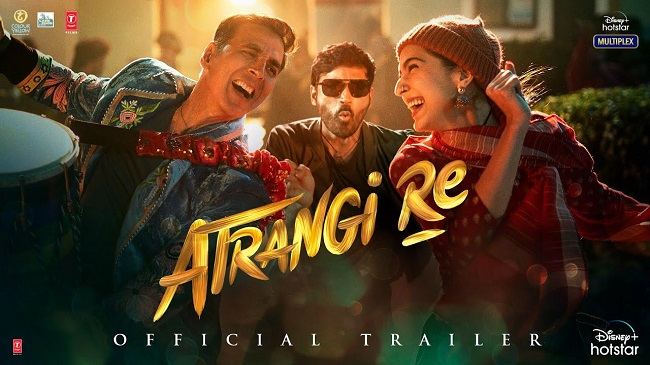 Atrangi Re film starring Dhanush, Sara Ali Khan along with Akshay Kumar is scheduled to release for 24th December on Hotstar OTT platform.

The trailer of the film released on 24th November and it has become a viral hit. Movie follows director Aanand L Rai’s previous films like Tanu Weds Manu, Tanu Weds Manu returns success formula. It is a triangle love story.

This time the woman falls in love with two men at the same time. Himanshu Sharma, frequent collaborator of the director, wrote the script for this film too.

The director Aanand and actor Dhanush have come together before for Ranjhaana. AR Rahman scored music for the love story and songs are still hugely popular.

This combination is back with Akshay Kumar and Sara Ali Khan as addition to the cast. Sara in a village girl character looks believable and she falls in love with two men at a time.

Well, this love triangle is comic and at the same time tragic for the characters involved. Let’s see if the director and actor can repeat Ranjhaana magic with ARR on their side.

Movie is releasing as Galatta Kalyanam in Tamil.