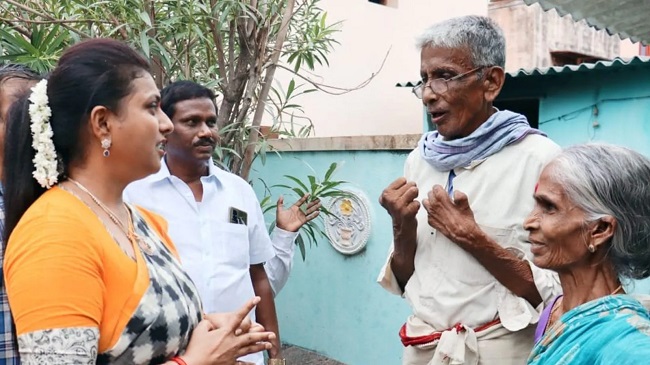 The first day of the YSRCP’s “Gadapa Gadapaku Government” proved to be an anti-climax for the YSRCP leaders. They were mobbed at various places and had a tough time dealing with the complaints of the people. In several places, the general public sought to know why the roads were so bad.

At some places, the YSRCP leaders abandoned the programme midway. Finance Minister Buggana Rajendranath Reddy had to stop midway and leave the venue. Even minister Ambati Rambabu could not answer the questions raised by the people. After attending one or two programmes, he left in a huff saying that he has other engagements.

Newly inducted minister Roja too faced a tough time. While attending a meeting in Kalluru village in Vadamalapeta village, a person sought to know why the power tariff was hiked. He said while Amma Vodi was a good programme, paying power bills was turning out to be a huge problem. Roja lost her cool and said he was doing Chandrababu brand of politics.

In another place, she was stopped by a woman working in the Aasara department. She demanded a pay hike. She said the Telangana government has hiked the salaries of Aasara workers to Rs 2000 per month and wanted AP to do the same. Roja evaded a reply and walked ahead. Most ministers faced similar situation in their respective areas.