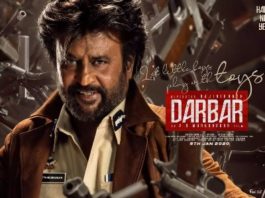 Tamil directors seem to be celebrating Rajinikanth who is nearing his seventies. Darbar is yet another eighties styled Rajini movie after Karthik Subbaraj’s Petta. Here Murugadoss tries to bring out the Rajini fan in him in each and every scene.

Aditya Arunachalam (Rajinikanth) who describes himself as a bad cop is after Mumbai drug and women trafficking mafia killing each and everybody in his sight. There is a very long flashback for Aditya to turn into a maniac. His only daughter Valli (Niveda) gets killed by an unknown villain and Aditya is unable to identify who killed her. So he starts eliminating every bad person in the city.

Rajinikanth is the sole reason why this film is made and every scene in the film looks like as if Murugadoss believed that the sheer presence of Rajini will take care of it. Rajini almost pulled it off with his vintage style and mannerisms. Nayanthara is there for the namesake and doesn’t add any value to the script or cast. Niveda Thomas is good as Rajni’s daughter and her performance in her last sequence is one of the best things about Darbar. Suneil Shetty plays a villain character who seems like a robot. Yogi Babu’s satires on Rajini’s age brings few laughs.

Murugadoss films have decent plots in general. But Darbar looks like an exception. He has written a script that fits old Rajini into a commercial potboiler. There are a few enjoyable scenes here and there, but the lazy writing keeps bothering the viewers time and again. Murugadoss’s direction in the second half and the third act in particular is laughable. The screenplay is very predictable that they hardly engage in the second half.

Anirudh’s background score will give a high to Rajinikanth fans in a couple of action scenes. His soundtrack is very passable. Cinematography is good with colorful visuals. Producers have spent a lot of money to match the grandness of a Rajini starrer. Editing is poor. Action directors only had a couple of tricks in their book to showcase Rajini’s muscle power.

Darbar is a very ordinary film but it is not a movie that is ‘unwatchable’. Vintage Rajini moments are okay to watch in the first half. The romance track is there for entertainment purposes, but Nayanthara’s track looks pointless and also comes as a speed breaker when Rajini is rocking in the action mode. Murugadoss should have focused more on the father-daughter angle as the story is based on it. There wouldn’t have been much difference even without Nayanthara’s episodes. In fact it would have made the film a bit more authentic than being a clone of Rajini’s usual potboilers.

Initial scenes showing Rajini as a rebel cop who fears nothing are entertaining. Even the initial portions of the flashback episode are good despite the odd romance track that doesn’t fit into the narrative. Putting a proxy in the place of a dreaded criminal is a nice idea but it isn’t effectively shot. On a whole, first half of Darbar is passable with occasional fun moments and Rajinikanth enjoying himself on the screen. We expect the film to be engaging once Suneil Shetty enters the scene.

But the hide and seek games that the villain plays are pretty basic without any excitement. The major happening in the second half also was revealed even before the flashback starts, which is why the screenplay turns all the more predictable. Rajini finding the identity of the killer of his daughter is also done in an unexciting way. There is not a single scene that shows the brilliance of Murugadoss. He relied so much on Rajinikanth that the veteran had to do workouts at this age to show is ageing muscles.

A better climax would have redeemed the film to an extent, but the final face-off between Rajini and Suneil is downright silly. Darbar is a film aimed at Rajinikanth fans. It gives them some moments to get Rajinified, but as a film it is just another regular masala fare with a half baked script that is filled with scenes made out of underdeveloped ideas.