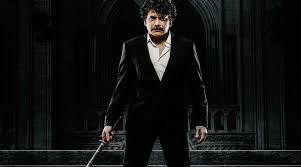 As it is known, senior star hero Nagarjuna’s ‘The Ghost’ is releasing on October 5th. The teasers and trailer created a very impression on the movie and Nag will be seen as an Interpol officer while Sonal Chauhan is the female lead. With the release date fast approaching, the makers organized a pre-release event which took place in Kurnool on Sunday.

Nag’s sons Naga Chaitanya and Akhil graced the event as the special guests and Akkineni fans were thrilled to see the three of them together. Speaking at the event, Akhil said, “I am seeing Nagarjuna the same way I always wanted to see him. The fire and intensity are very high. The hunger and motivation are still the same for my father and that keeps us on our toes. There is a fire in every content of the film and we will see that fire in the film on October 5th as well.”

Naga Chaitanya too was in awe of his dad’s transformation when he said, “My father is continuously talking about The Ghost whenever we meet. I did not see anything beyond the trailer but the transformation from Bangarraju to The Ghost is amazing. It is inspiring and we all look up to. Thanks Praveen for showing Nanna in a stylish action flick. All the very best to the team.”

Nagarjuna compared ‘The Ghost’ with his iconic flick ‘Shiva’. He explained, “When Shiva was released, everyone was raving about its sound design. The cycle chain I used in the film later became a cultural reference. It is going to the sword I used in this movie. The action choreography and the lavish visuals of this film will be talked about for a long time. I have done many action films in my career but this is entirely different. Praveen Sattaru’s work will be appreciated by everyone.”