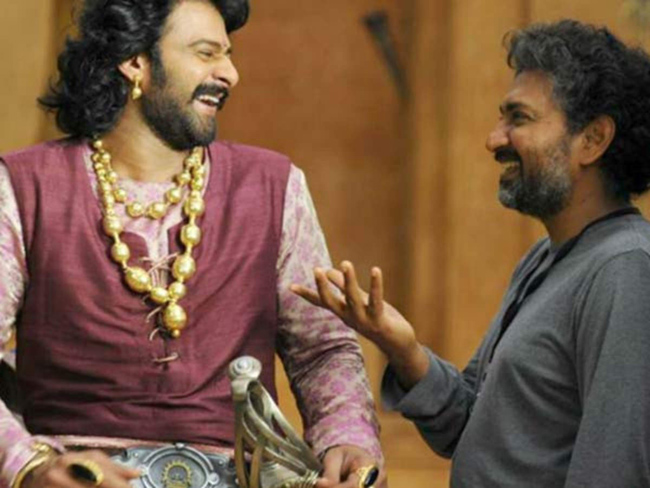 Prabhas and Rajamouli rewrote many pre-existing records in Indian cinema with the Baahubali duology. The epic folklore drama is the biggest ox office blockbuster in the history of Indian cinema. The film made both Prabhas and Rajamouli pan-India superstars. If the latest reports are to be believed, Mythri Movie Makers are orchestrating a project that will mark the collaboration of Prabhas and Rajamouli. The top production house had already acquired Prabhas’s dates many years ago by offering him a big fat paycheque as token advance, It is head that the happening production house has initiated talks with Rajamouli regarding the project now.

Both Prabhas and Rajamouli are excited about the prospect of joining forces for another project in the near future, but their current commitments will be keeping them from doing so. Rajamouli is currently occupied with RRR, a periodic actioner starring Ram Charan and Jr NTR. He is scheduled to work with superstar Mahesh Babu for his next project that will be officially announced once RRR is wrapped up. Only after Rajamouli is done with Mahesh Babu’s project can he think about his forthcoming projects.

Even Prabhas is a super busy man now. He is simultaneously working on two pan-India biggies, namely Salaar and Adipurush now. These two biggies are still in the early stages of production and Prabhas is expected to work on them for a few more months from now. Once he is done with these two big-ticket projects, Prabhas will be joining hands with Nag Ashwin for Project K, which will hit the floors early next year. Post which, Prabhas is likely to work with Bollywood director, Siddharth Anand for an action thriller.

It is very much evident that both Prabhas and Rajamouli are preoccupied with their current commitments. But the motive of Mythri Movie Makers is to materialize this project sooner or later. They are even ready to wait for a whole lot of time to materialize this project. More details will be out once Prabhas and Rajamouli principally agree to join hands again.There are also reports claiming that Mythri Movie Makers are ready to allot an unprecedented budget for the project.