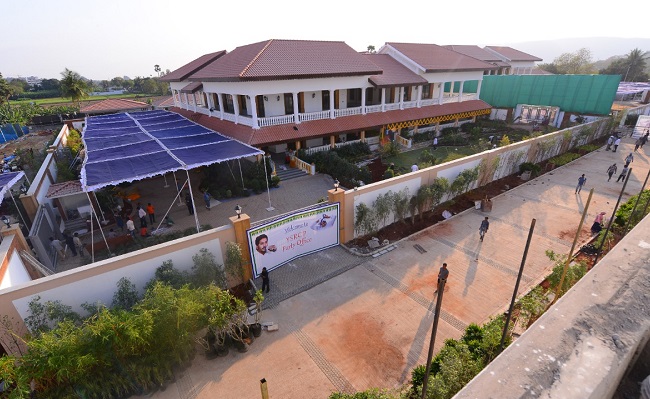 YSR Congress party president Y S Jaganmohan Reddy is pretty confident that his party is going to come to power in Andhra Pradesh and he will be the next chief minister after May 23, when the results will be declared.

It was evident from the way the YSRC chief decided to shift his residence and office – lock, stock and barrel from Lotus Pond in Hyderabad to his new office-cum-residential complex at Tadepalli in Guntur district, which is now part of Amaravati.

Jagan has already constructed a huge residence-cum-official complex in three acres of land at Tadepalli, for which he had performed gruhapravesham on February 27.

The shifting of YSRC central office at Lotus Pond to Tadepalli has already commenced. On Monday, the party staff started moving all the furniture, computers and other party material to Tadepalli.

“It will be completed in two or three days. After that, the YSRC ceases to operate from Hyderabad,” a party leader said.

Jagan himself will move to the new residence on May 22, a day before the announcement of results. He will monitor the party activities from there hereafter. His mother Vijayalakshmi, sister Sharmila and wife Bharati will, however, stay back in Hyderabad for some time.

“If he becomes the chief minister of the state, he would get it converted into the official residence,” he said.

Jagan called for a meeting of all the party candidates who contested the assembly and Lok Sabha elections and counting agents at Tadepalli on May 16 to discuss the arrangements for counting.

“Training will be given to all the counting agents of the party on the precautions to be taken during the counting of votes recorded by EVMs and also the VVPAT machines,” the party leader said.