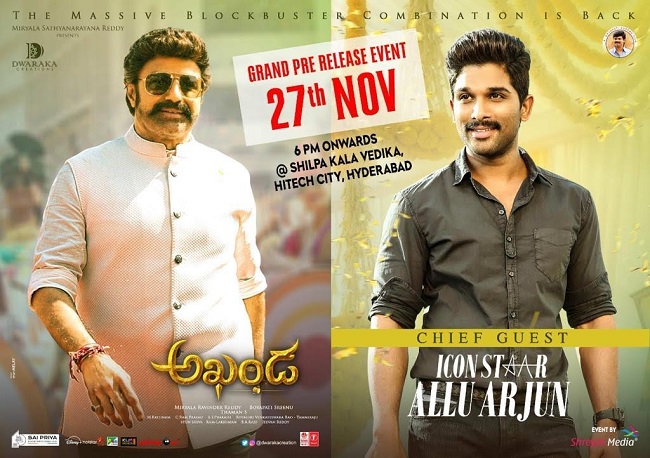 Icon Star Allu Arjun has a great rapport with Boyapati Srinu. The director gave him his second biggest hit in his career, massy film Sarrainodu. Until the release of Ala Vaikuntapurramuloo, Sarrainodu has been the biggest blockbuster of Allu Arjun.

The duo might come together in future for a film too. Currently both of them are busy with their respective other projects. Allu Arjun is waiting for the release of his next film, Pushpa The Rise.

Well, there have been speculations about who will be invited as chief guest for Nandamuri Balakrishna’s Akhanda film pre-release event.

Movie is gearing up to hit screens on 2nd December and SS Thaman scored music for the film. The composer has said that he did his best to make NBK and his combination film memorable.

This is third film for Boyapati and NBK combination as well. As this is a special film, speculations have been rife about who will attend Akhanda pre-release event. Many thought Jr. NTR and Kalyanram will attend.

But now the makers have confirmed that Allu Arjun will attend the event on 27th November. Looks like Allu Aravind has become a close friend of NBK after producing Unstoppable show with the actor for Aha.