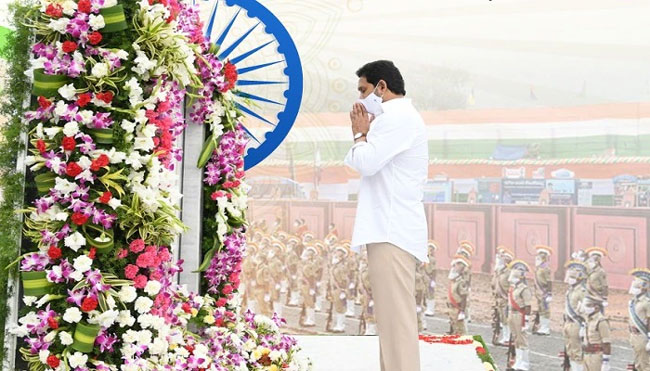 The temple city Vijayawada had hosted the Police Martyrs’ Remembrance Day function on Thursday. YSRCP chief and serving Chief Minister of Andhra Pradesh YS Jagan Mohan Reddy had attended the function as the chief guest. As per the protocol, the Chief Minister received a police salute. The salute was followed by the Chief Minister’s address.

The Chief Minister said, on the behalf of the Andhra Pradesh government he is paying tributes to the Martyrs who lost their lives while rendering their services. CM Jagan had also announced the new benefits the government had brought for the police personnel.

For the first time in history, we had brought a weekly off system for the cops. We had earlier planned to announce and implement the same last year but we could not implement the same due to the Covid fear, the Chief Minister said.

The weekly-off system for the cops in the state comes into effect from Thursday(today). In the police department, a lot of jobs were recruited. The government had announced Rs 10 lakh as ex-gratia for the cops who lost their lives to Covid. On top of this, we are also providing medical facilities for the cops who catch Covid, the Chief Minister said.

The Chief Minister said the state has zero tolerance towards those who harm the law and order in the state. CM Jagan went on to say that the cops will not spare the anti-social elements in society.

As per the plan, the weekly off system for the cops was supposed to be implemented in 2020. However, the Covid outbreak had put brakes on the scheme. As the Covid fear had come down a bit, we have decided to launch the scheme this year, CM Jagan said while addressing the gathering at the function.