Advertisement
Home News Film News Chiru-Mahesh Film: Is There Any Hidden Truth In This? 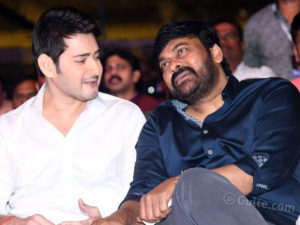 Responding on the news that Mahesh Babu is part of his upcoming film “Acharya”, Megastar Chiranjeevi clarified in his Andhrajyothy interview that they have neither approached Mahesh nor the actor asked him for a role. “I don’t know how that rumour came out, but Kortala wants Ram Charan to do that, there is never talk about Mahesh’s cameo,” said Chiranjeevi.

But then, Chiru’s clarification doesn’t sound fulfilling because without any talk of such a thing, why would there be smoke billowing all these days? In the first place, when the rumour broke out and went to peaks, neither Mahesh Babu nor Koratala Siva has condemned it. Both these celebs are highly active on Twitter where they indulge in clarifying every single rumour that comes around. As they are silent, it is widely believed that Mahesh is doing a cameo in Acharya, for sure.

And with Trisha walking out, it has got confirmed that they are adding up another heroine to pair with Mahesh’s role, and hence the Chennai siren took such decision. Later it started coming out that remuneration discussions aren’t fruitful as Konidela Productions felt that giving 30 crores to Mahesh won’t bring any additional income to the film while avoiding his cameo would save them that investment.

However, the utter silence of Mahesh all these times has further fueled the speculations that they are just keeping the news as a secret but Superstar will join hands with Megastar. And now that Chiru says they have never thought of Mahesh, it looks like they want to wipe out the whole talks and express as if nothing sort of a discussion has taken place, say cine folks. Only Mahesh and Chiru could explain what is that hidden truth behind this happening anyway.