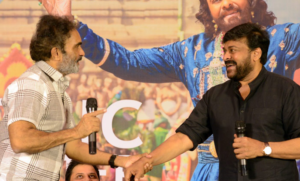 Nearly after 36 years, Megastar Chiru and his co-actor Sai Chand have united for a film. For the uninitiated, actor Sai Chand appeared as one of the leads in Manchu Pallaki movie along with Chiranjeevi and later disappeared after doing half a dozen films.

Tripuraneni Sai Chand, who happens to be the grandson of legendary Telugu figure Tripuraneni Ramaswamy, is known for acting in films during the 80s but later turned to make documentaries. He made his re-entry with Sekhar Kammula’s Fidaa in the role of Sai Pallavi’s father. And now, his presence in the role of ‘Subbayyya’ in Sye Raa movie is winning accolades.

None other than Chiranjeevi said, “Just for a role that has few minutes screen time and only 3-4 scenes, Sai Chand gave us his two years, and didn’t sign another film even though I recommend him to do it. He has grown his beard for real to bring authenticity to Subbayya role. Now that his role is getting great accolades only because of the hard work he has put in”.

Even Sai Chand is quite happy that Chiranjeevi gave him this role. “After the release of the film, Chiranjeevi garu called me to appreciate for Subbayya role and wished that I win awards for it. Such words coming from a Megastar itself are like an Oscar award to me”, says Sai Chand.