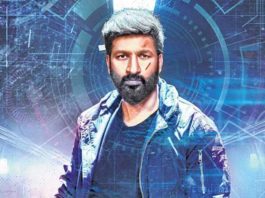 Gopichand has not delivered a hit in the recent past. Of late, he has been struggling to offer a decent outing.

Moving out of his comfort zone of mass entertainers, he has attempted a spy thriller with “Chanakya”. Does this offer him a fresh boost to his career?

Story:
Arjun (Gopichand) is an undercover RAW officer but he poses as a bank employee Ramakrishna to the outside world.

India’s most wanted terrorist Qureshi and his son are hiding in Pakistan with the full security provided by ISI.

As India is gearing up to host G8 Summit, the government of India doesn’t want to take any risk of saving four kidnapped officers, who were abducted by Qureshi. But Arjun goes out to Karachi to save his fellow officers much against the orders of his boss.

Will he succeed in this operation ‘Chanakya’?

Artistes’ Performances:
Gopichand has played the role of a RAW officer in a typical mas-hero style. He has portrayed the character in his usual manner.

The character of Mehreen as his love interest is so dumb. The less we talk about the performance of Mehreen and Zareen Khan as Raw informer in Pakistan the better.

Nasser as the Chief of RAW is just okay. The villains are fitted to their roles.

Technical Excellence:
The film is shot lavishly in Rajasthan and surrounding areas. Superb camerawork by Vetri is the main highlight of the movie.

The music, the dialogues, the action stunts, and other technical output are quite ordinary.

Highlights:
Some episodes in the second half

Analysis
Spy thrillers are Hollywood’s forte. Many Indian films have drawn inspiration from the Hollywood movies and followed their template of spy genre to a large extent.

Very recently we have seen an engaging spy thriller – Adivi Sesh’s “Goodachari” that won rave reviews for its engaging screenplay and intelligent twists and turns.

But Gopichand starrer “Chanakya” is quite the opposite. This spy thriller is not only boring but also looks like a mess in the end.

Mark our words, at the end of the interval bang, you would feel cursing yourself for seeing an awful romantic track between Gopichand and Mehreen.

The story involves two pet dogs. A veterinary doctor (played by Ali) tells Mehreen that her pet dog needs a female puppy for mating. She approaches Gopichand asking him to allow the mating of their dogs, he initially refuses and she tries to convince him with all sorts of talk (condoms, paying money for hours, booking resorts, etc). By the end of this long and awful track, they fall in love! Such is the writing standard of this movie.

Thankfully, we don’t see such lousy scenes in the second half. But we don’t get many interesting scenes either.

The Zareen Khan episode is laughable.

All in all, “Chanakya” is a spy thriller made in a particular template with a weak screenplay. The villain keeps on saying expect the unexpected, but we don’t get to such novelty here.