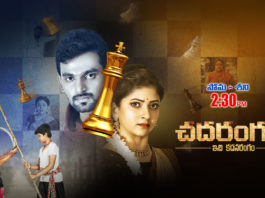 Allari Naresh finally managed to score a box office as his latest outing Naandhi is doing reasonably well at the ticket counters. Also, Naresh is being applauded for his spellbinding performance.

Coming to the topic, the makers of Naandhi called for a success meet event yesterday and Dil Raju graced it.

Speaking about Naandhi, Dil Raju said he couldn’t wait to appreciate the movie unit after watching the film and added that he is happy for Allari Naresh.

“I am ready to produce a film with Allari Naresh in the near future if he approaches me with the right director and a winning script. I hope he comes up with the right script,” Dil Raju said.

The acclaim producer went on to say that content-driven films like Naandhi are the need of the hour and said he is happy that the Telugu audiences are lapping up the Naresh starrer.

Naandhi had Vijay Kanakamedala at the helm and it was produced by TG Vishwa Prasad and Abhishek Agarwal.