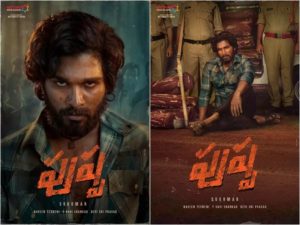 Stylish star Allu Arjun takes a lot of care regarding his dressing and hairstyle in films. He justifies his tag as a lot of work goes through for a perfect look in every film. Unlike the films he did before, Bunny will be seen playing the role of lorry cleaner Pushparaj in this upcoming flick ‘Pushpa’. The film is a raw and rustic action entertainer which is going to have a pan-Indian release.

Reports suggest that Allu Arjun along with his team is working really hard to attain the best suitable look and physique for ‘Pushpa’. Apparently, Bunny is spending two hours to put on the makeup and is also getting tanned completely for the dark complexion to make his look believable. He is striving for perfection and at the end of every day, he has to allot one and half hour to take the entire makeup off.

Starting from his hair to eyebrows and mustache, every inch of Bunny’s look is monitored carefully and the star hero himself is pushing people around to give the best they can. The shooting is going on a Tenkasi at Tamil Nadu right now and the film is slated to hit the screens on 13th August. Rashmika is the heroine in this flick which is based on the red sanders smuggling backdrop in Nallamala forests. Devi Sri Prasad is composing music for this flick while Sukumar is its director.