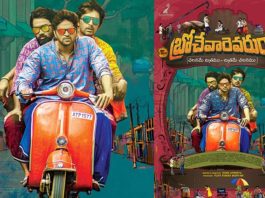 The collaboration of Sree Vishnu and Vivek Athreya, of Mental Madhilo fame, did create curiosity. The addition of Nivetha Thomas, Nivetha Pethuraj, Priyadarshi and Rahul Ramakrishna has added to the buzz. The film’s teaser and trailer did work in the favour of the film. Without much delay, let’s check out our take on Brochevarevarura.

Rahul (Sree Vishnu), Rakesh (Priyadarshi) and Rambabu (Rahul Ramakrishna) are struggling to pass Intermediate. They are not regular to college and poor at academics. And they meet new joiner Mithra (Nivetha Thomas), daughter of principal Radha Krishna (Shrikanth Krishnaswamy). Mithra too is not interested in studies. She is a state-level Bharatanaytam dancer and wants to continue her interest. But she is staying with her father after she lost her mother. How Mithra tries to escape from her problems and how Rahul and his friends help her? What new problems they encounter with? How do they overcome?

Nivetha Thomas has pulled off a yet another challenging role Mithra. She is perfect cast for the role. She has done very well in emotional scenes. Nivetha’s scenes with her father convey a lot. She emoted with her eyes. Sree Vishnu has chosen a role that is apt for him. As an underdog, as a care-less youth, he is good. His body language, attitude and characterization match and makes it natural. Priyadarshi and Rahul are on dot with their roles. They are hilarious at portions. Shrikanth is alright as a strict father and college principal. Nivetha Pethuraj is seen as actress Shalini and she does justice. Sathya has come up with brilliant show as an aspiring filmmaker who is struggling for his debut film. Others also did a good job.

After his directorial debut Mental Madhilo, Vivek Athreya has come up with a racy, edgy crime comedy Brochevarevarura. While Mental Madhilo was a bit slow, Brochevarevarura is more racy. This is what makes it more appealing to youths. Well written characters, entertaining first half and interesting twists in the second half make Brochevarevarura a brilliant film. Technically, the film has nothing to point out. Background score is quite complimenting. Vivek Sagar deserves a pat on the back. Editing is good. The film is slick.

Some Scenes in Second Half

Brochevarevarura has everything to appeal to young audiences. It is compelling, slick, well-written and well performed. The college scenes in the first half are hilarious and instantly connect to youth. How Rahul, Rakesh and Rambabu survive in college tickle one’s funny bones. The kidnap episode of Mithra by her own friends is hilarious to the core. How Rahul takes revenge on principal makes it more funny. But there’s more to the story. Mithra’s character has a lot of depth. And the story revolves around her. It has been handled well by Vivek.

The biggest strength of the film is that it keeps moving and it doesn’t stop anywhere. The puzzle of what is going to happen next makes it engaging. How well the stories of Sathya and Sree Vishnu have been connected is where director Vivek succeeded. But some portions in the second-half put us off. Even the climax is weak and predictable. Vivek should have written a better climax. Yet these are passable.

Barring some disconnecting scenes and handful of dejavu moments, Brochevarevarura has enough to make it worth watching. Well written characters, entertaining first half and impressive twists make the film more engaging. The film is genuine to its genre and delivers what it is meant for. All dots have been connected well.