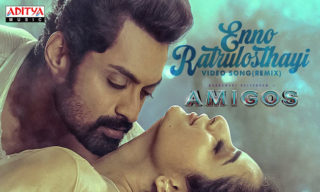 After getting postponed due to the health condition of Taraka Ratna, the makers of Nandamuri Kalyan Ram’s upcoming movie ‘Amigos’ have released the much-awaited remixed version of the super hit ‘Enno Ratrulosthayi’ song. Instead of a lyrical, they released the complete video which has made the fans very happy.

While SP Balasubramanyam has sung the original version, it is his son SP Charan who sang the remix version. He did a great job. Sameera Bharadwaj provided the female vocals and we all know that Veturi Sundara Rama Murthy’s lyrics are irreplaceable. It is Ilayaraja who composed the magical original tune while Ghibran remixed and injected some additional arrangements to it.

Heroine Ashika Ranganath is looking too glamorous in the revealing sarees while Kalyan Ram looked slim, stylish and flaunted his six-pack abs in the song. The chemistry between the lead pair is amazing to watch and this song is going to be a treat to see on the big screens.

The movie is produced under Mythri Movie Makers banner. This intriguing movie is hitting the screens on 10th February. Sounder Rajan S is the director of photography while Tammi Raju is the editor. Rajendra Reddy took care of the story, screenplay and dialogues too while Avinash Kolla is the production designer.

Venkat and Ram Kishan are the fight masters for this movie. Rajendar Reddy is the director of ‘Amigos’ while Ghibran is the music composer. Kalyan Ram is sporting different looks for all three characters in this movie. Kalyan Ram’s last film ‘Bimbisara’ turned out to be a super hit.