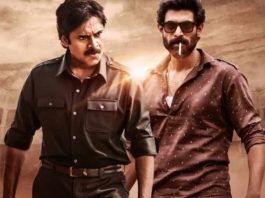 “Bheemla Nayak” has become the talking point lately. Since its launch, the hype began going upwards. Pawan Kalyan and Rana sharing screen space for the first time and Trivikram writing the dialogues are the prime reasons for all the hype.

The songs topping the charts further spiked the expectations. Also, it is the official remake of a blockbuster Malayalam film.

So, let’s find out whether the film meets the expectations or not.

What’s It About?
Bheemla Nayak (Pawan Kalyan) works as a sub-inspector of police in the Srisailam region of Nallamala forests in Andhra Pradesh. He is an upright and honest police officer.

Daniel Sekhar (Rana Daggubati) is a politically well-connected rich youngster. At a checking point in the forest, officials stop Dani’s car. After officials note that he has a stock of alcohol in his car, they get him down. Dani assaults a police officer.

Police officer Bheemla Nayak books a case against Daniel Sekhar and takes him to the police station. This small incident leads to a battle between them, as neither of them is willing to give up.

Performances:
Pawan Kalyan is in fine form. He looks restrained in the initial stage but goes full throttle later. Pawan Kalyan shows two variations in his performance when wearing the uniform and off of it. Unlike Biju Menon, he doesn’t act like a wild animal but still performs effectively. Pawan Kalyan’s swag has added a lot to the effectiveness of the drama.

The casting of Rana Daggubati is a wise choice. He is perfect as a man with ego and prestige. He is the perfect man to challenge Pawan Kalyan, he goes all out to fit against the star.

Nithya Menen delivers her part well. Samyuktha Menon plays a typical wife’s role, but she gets her due in the climax portion. Samuthirakhani played his part well perfectly in sync with the given character as an arrogant politician. Murali Sharma is okay.

Technical Aspects:
Thaman’s music is the strong point. He has elevated the mood with effective music. He has given what’s required, never going out of the theme.

Thumbs Down:
The climax portion
Rana’s scenes in the second half

Analysis:
The basic premise of “Bheemla Nayak”, which is the official remake of Malayalam hit “Ayyapanum Koshiyum”, is two men locking horns over a small incident. Can a drama be effective when there is no clearly defined villain in the story? Yes, “Ayappanum Koshiyum” proved it.

Directed by Saagar Chandra, with the adaptation by Trivikram, “Bheemla Nayak” retains the basic story and follows the screenplay of the original for the first half of the movie. The second half has gone for a major change. The Malayalam version has maintained equilibrium in two characters, “Bheemla Nayak” tilts towards Pawan Kalyan.

The first half of the film shows the basis for their clash. The interval bang sets the mood well. The second half of the film is different from the Malayalam version. We get to see a flashback of Pawan Kalyan, which is written to suit his image. The climax, again, is far away from the original. While the Malayalam version has more physical action, here we see a verbal duel.

But “Bheemla Nayak” is a tighter version. Trivikram has done some nice changes to the original, like linking the flashback to the climax, giving a reason to Pawan’s motives, and doing away with repetitive elements.

Pawan Kalyan is a local guy, Rana enters as an outsider. The one leads a modest life, the other is a rich guy with political connections. The way they behave in a situation has impacted dynamics between them. This angle was more evident in Malayalam, but here it doesn’t get right. Luckily, it doesn’t affect the flow.

Plus, the overt commercial elements at some places have diluted the impact.

The film’s main conflict is too simplistic. It also doesn’t have a strong villain required in a mass movie. Plus, by leaving out certain points from the original, it has become more or less, a mass action drama. And Rao Ramesh’s character should have been handled better.

‘Bheemla Nayak’ is also a double-edged movie, it shows the explosive attitude of Pawan Kalyan but doesn’t cater to his fans entirely like providing entertainment and masala songs. It has tried to balance both content and mass moments, which is the best part of this drama. All said, the intense and explosive attitude of Pawan Kalyan has worked to its advantage. The build-up is neat.

All in all, “Bheemla Nayak” is well-adapted to suit the nativity of Telugu. It is neatly made, balancing content and heroism. The face-off between Pawan Kalyan and Rana and the strong scenes are the major highlights. Despite some hiccups, it makes an engaging watch. It is massy and racy version of ‘Ayyapanum Koshiyam’.