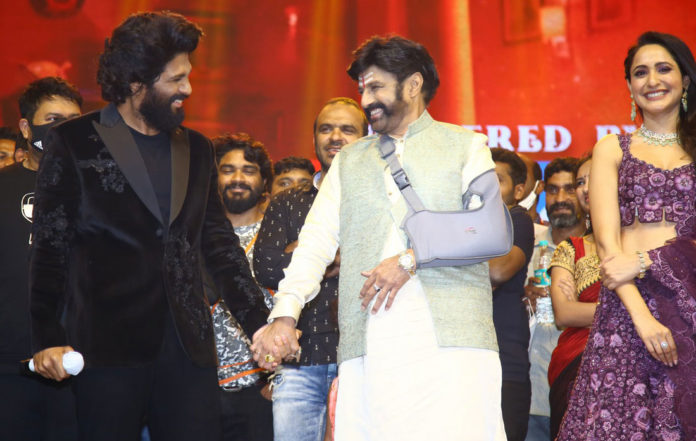 The grand pre-release event of Akhand was held the other night and it had a fair few highlights. The speeches of SS Rajamouli, Allu Arjun, and Balakrishna enthralled the fans.

“I can’t wait to watch the mass show Nandamuri Balakrishna and Boyapati Sreenu have in the store for use. I will watch the first day first show of the film. Balakrishna and Boyapati Sreenu should reveal the secret behind their oora mass energy. The entire Telugu film industry is hoping Akhand fares well at the box office and will bring back the lost glory at cinema theatres across the Telugu states.,” Rajamouli said.

Allu Arjun said “The Allu family and Nandamuri family share a very good bonding for three generations now. I have great respect for Balakrishna Garu. He is a real and honest human being. I wish Akhanda unit the very best. Akhand a is the first big star film to release after the Covid second wave. Telugu audience have always been overwhelmingly supportive of Telugu cinema and we hope this continues in the future as well. Even god can’t stop Telugu audience from lapping up our film industry and we are indebted for the same. Jai Balayya.”

Balakrishna said “Akhanda is my third collaboration with Boyapati Sreenu and you all will see a very good film on the 2nd of December. I wish Pushpa, RRR, Acharya, and other films that are gearing up for theatrical release in the near future all the very best. I hope the Telugu audience will give a warm reception to Akhanda.”

Boyapati Sreenu said the audience can happily come to theatres to watch Akhanda and go back with a wholehearted experience. The film caters to all sections of the audience.