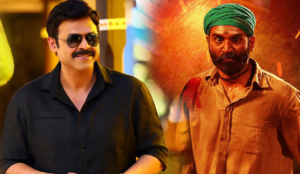 Producer Suresh Babu is trying to come up with new initiatives in the recent years and one of them is encouraging young talents. However, that hasn’t yielded much to him as a producer as films like C/o Kancharapalem and Ee Nagaraniki Emaindi haven’t given him ‘commercial’ satisfaction at the box office.

And now, Suresh is getting ready to remake some successful Hindi and Tamil films. The lineup is big, with Hindi hit Dream Girl already on the pipeline, Sonu Ke Titu Ki Sweety and Asuran remakes in the queue. While Dream Girl and Sonu Ke can be handled by even a fresher director, making Asuran needs a director who could handle intensity quite well.

After Tarun Bhaskar rejected to direct it and original director Vetrimaaran showing no interest, Suresh Babu has other day screened the movie for almost a bunch of twenty young directors in Tollywood. The producer wanted to find the willingness of these youngsters to take up the film after watching the show.

We hear that some don’t want to do a remake at all, while some are not confident about their capabilities to handle such intense film. Few of them are yet to share their opinion after the special screening. We have to see which director will come forward to handle Venky’s Telugu version of Asuran.