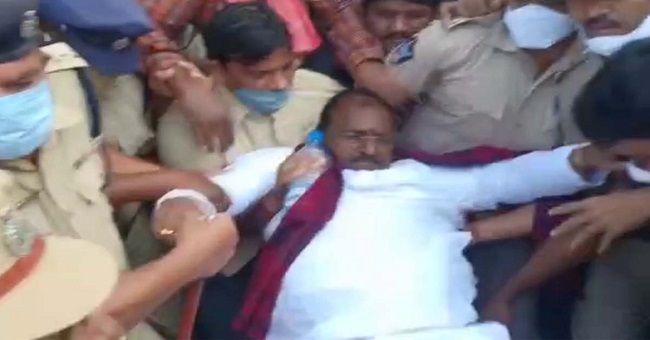 The alleged Casino that is believed to be set up in K-Convention Hall in Gudivada made everyone look at Andhra Pradesh’s Gudivada. Andhra Pradesh Minister for Civil Supplies and Consumer Affairs Kodali Nani, known for using foul language against the opponents is facing the heat from various corners on the issue.

Opposition Parties like Telugu Desam Party and Janasena have already slammed the ruling party on the issue. Now the saffron party Bharatiya Janata Party(BJP) joined the force to attack the YCP over the alleged Casino row.

Holding the ruling party responsible for the Casino incident, the Andhra Pradesh wing of BJP gave a call to reach Gudivada to protest against this. However, the AP BJP leaders were stopped by the cops en route to Gudivada.

After taking them into custody, they were shifted to the Untuguru Police Station. Andhra Pradesh Bharatiya Janata Party(BJP) chief Somu Veerraju lashed out at the government over the arrest and launched an attack against the ruling party.

Somu Veerraju expressed his dissatisfaction over the way the cops have arrested them and urged the cops to keep one thing in mind, that the political parties will be in power in just five years.

The AP BJP chief also came down severely on the Andhra Pradesh government on the PRC and said that the government should be held responsible for this. The BJP will support the employees, he said.