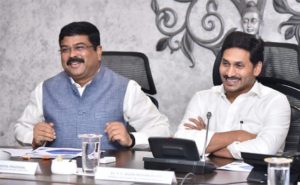 Hyderabad: Union Minister for Petroleum, Natural Resources and Steel Dharmendra Pradhan on Friday said that Andhra Pradesh would get Rs 2 lakh crore investments in the next five years as world leaders in petroleum sector are willing to invest in the east coast.

The minister told Chief Minister Y. S. Jagan Mohan Reddy at a meeting at the State Secretariat here that many big players in the petroleum sector are showing interest in investing in Andhra Pradesh. He said in the coming five years the state would get Rs 2 lakh crore investments in petrol, natural gas and steel sectors.

He responded positively to Reddy’s request for the supply of iron ore from National Mineral Development Corporation (NMDC) to the proposed steel plant in Kadapa district.

The state government and the NMDC would sign an agreement in this regard very soon.

The Chief Minister said the quantum of investments would increase with the setting up of Kadapa Steel Plant, expansion project in Visakhapatnam and establishment of petro complex at Kakinada. He said that Andhra Pradesh has an open mind on industrialisation.

In response to the state government’s request to expedite payment of Rs 81 crore to 16,554 fishermen of Bhairavapalem village in East Godavari district who were affected by the off-shore drilling by the Oil and Natural Gas Commission (ONGC) Limited, the union minister directed the ONGC officials to clear the compensation immediately.

The Chief Minister also sought an equal share of the royalty collected by the union government from oil and gas companies as their units pose various environmental risks and also cause depletion of the fish population.

The Chief Minister requested the Union Minister to set up a greenfield crude oil refinery and petrochemical complex in Kakinada as mentioned in Andhra Pradesh Reorganisation Act 2014. He also sought setting up of a Petroleum University in Kakinada.