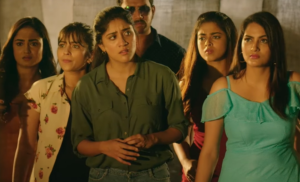 From Cheekati Gadhilo Chithakkottudu to Edu Chepala Katha, sex comedies in Telugu films have reached a stage where a guy fantasises about different women under the pretext of different things. Now, let us eat the grass on the other side as this new film focuses on four girls taking on one guy for a ride.

The trailer of the upcoming movie “Anukunnadhi Okkati Aynadhi Okkati” is out now and the film has four girls hiring a stripper in Goa, and something happening to him as the guy gets murdered.

Lots of double entendres laced with Dhanya Balakrishnan, Siddhi Idnani and Tridha Chowdhary’s glamour, this film directed by Baalu Adusumilli as simply another version of above said movies, with the sleaze factor brought down a bit.

There is no dearth of booth dialogues in the movie it looks like, while glamour quotient is also poured well.

And the whole setup looks routine as we have seen this story of ‘vacation went wrong’ many times. But we have to see if this adult comedy is going to get a similar attention like those other boothu movies or not.

Shocking Facts Revealed In Survey On Coronavirus Precuations In India