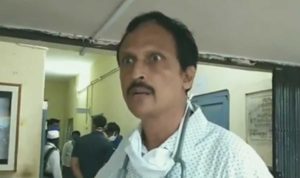 A doctor working in Narsipatnam government hospital was suspended by the YSRCP government for posting a video complaining about the lack of masks and gloves to treat toe Corona suspects. This video of the doctor blaming the AP government and praising the Telangana government went viral on social media and his comments were published in newspapers.

“Dr. Sudhakar opened up about the lack of masks and gloves at Narsipatnam Govt Hospital which is the minimum responsibility of AP Govt. Instead of addressing the issue, the doctor was suspended. His only crime was to demand for an N-95 mask. This is utterly shocking.If frontline medical soldiers are disrespected like this, how will @ysjagan motivate them enough to expose themselves to risk in order to protect others. Doctors and healthcare staff must be protected and cared for during these terrible times,” tweeted Chandrababu.