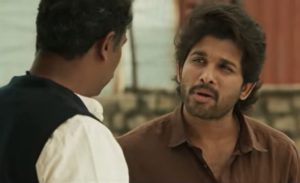 Ala Vaikunthapurramuloo has been making a lot of noise with its sensational hit musical numbers and colorful looking posters.

The much awaited teaser of AVPL lives up to the expectations as it promises to be a well-packaged entertainer with all the elements that cater to all sections of audience.

Allu Arjun is looking at his stylish best in a role that looks tailor-made for him. The dialogue, expression and the last ‘beedi lighting’ shot showcases his mass side. The teaser revolves around Allu Arjun, but also covers all the main star cast.

Trivikram’s mark is present all over the teaser and many shots have an uncanny resemblance to that of the director’s industry hit Attarintiki Daredi.

Family entertainers have been doing exceptionally well at Sankranthi box office in recent times and Ala Vaikunthapurramulo ticks all the boxes that the festive crowds look for in terms of movie entertainment.

Trivikram fans will be happy to see the director back to his strengths as they missed his ‘trademark’ in his previous outing Aravindha Sametha. Also Allu Arjun fans will be rejoiced to see him in his zone after his uncharacteristically serious act in Naa Peru Surya. On a whole, Ala Vaikunthapurramuloo teaser will instil confidence in its buyers and create worries for its competition.