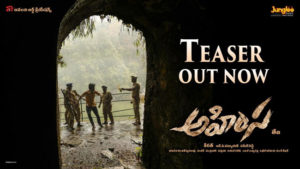 Director Teja is a well-known filmmaker in Tollywood. He introduced some of the brightest talents to Telugu cinema like Uday Kiran, Nithin, Sada, Kajal Agarwal, Navdeep and many others. He is a knack for bringing the best out of young actors and that is the reason why he has been given the responsibility of launching Daggubati Rana’s younger brother Abhiram Daggubati. P Kiran is the producer ‘Ahimsa’ and it is made under ‘Anandi Art Creations’. After the release of a glimpse and a song, the makers have now unveiled the teaser.

The teaser starts off on a pleasant note and establishes the love story of innocent souls Raghu and Ahalya. The protagonist is a young farmer who has no big dreams in life but is happy with what he’s got. Moreover, he is completely against violence and tells everyone to follow Buddha’s philosophy of following a non-violent path. But a series of unexpected events turns his life upside down and violence gollows him. The teaser looks simple and interesting. Teja established the love story and conflict part quite well in the teaser. Abhiram looks decent while Geethika looked beautiful on screen. Sadha and a few other actors make their presence felt in the teaser as well.

The combination of director Teja and music composer RP Patnaik who have memorable music with their films like ‘Nuvvu Nenu’, ‘Chitram’, ‘Jayam’ and others have teamed up after a long time. He gave an impactful soundtrack for the teaser too. The teaser definitely gives a positive vibe to this film and we need to wait and see how the film turns out.

Sameer Reddy is handling the cinematography department. Kotagiri Venkateswara Rao is the editor of this movie. Dialogues were penned by Anil Achugatla while Supriya is the art director. Chandrabose penned the lyrics while BV Ramana is the action director. The rest of the cast of this film includes Rajat Bedi, Sadha, Ravi Kale, Kamal Kamaraju, Manoj Tiger, Kalpalatha, Devi Prasad and others. The release date is expected to be announced soon.