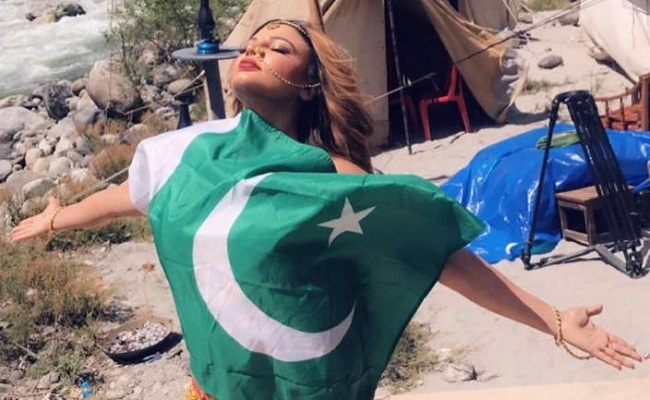 Actress and controversy queen Rakhi Sawant has ruffled feathers once again on the social media. This time, by posing with the Pakistan flag.

On Wednesday, Rakhi shared a photograph of herself on Instagram. She is seen dressed in a feather skirt with thigh-high slit paired with a halter neck and low-cut blouse, and adorns a Pakistan flag.

With the picture, came a disclaimer from Rakhi: “I love my India but it is my character in the film ‘Dhara 370’.”

But fans weren’t too impressed.

Later, Rakhi posted two videos to make her stance clear. She said the film “Dhara 370” is based on Kashmiri Pundits.

In another video, she said: “I would like to tell people that I am playing a Pakistani girl (in the film). People from Pakistan too have a heart… All of them are not bad. Some people, who ask children to commit jihad against their people and country… The ones who are against Allah. I respect people from Pakistan.”

Rakhi is an avid social media user and she keeps grabbing headlines for her antics.

She rose to fame with her appearance on the first season of the controversial Indian reality television series “Bigg Boss” in 2006. She was also seen in films like “Masti”, “Main Hoon Na”, “Chura Liyaa Hai Tumne”, “Dil Bole Hadippa!” and “Jis Desh Mein Ganga Rehta Hain”.