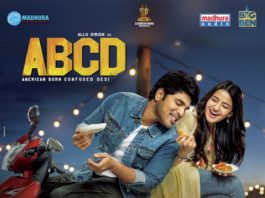 Thanks to super hit song Mella Mella Mellaga that has created enough buzz around ABCD, a remake of Malayalam film of the same name. Allu Sirish slips into the role of a rich NRI guy who is thrown into dire situation by his father. Sanjeev Reddy is the director for this comedy with political backdrop.

Avi(Sirish) and Basha(Bharath) are sent to India as they don’t know the value of money. They were given just Rs. 5000 per month to survive in India. How can a rich NRI who spends $20K per month lead a life as a commoner in India?

Allu Sirish suits the role of a rich guy and he does well as per character’s requirements. Bharath is good as his sidekick. Rukshar looks pretty and her performance is okay. Nagababu is adequate as the strict and unapologetic father. Raja as the villain fails to shine. Kota and Subhalekha Sudhakar played supporting roles. Vennela Kishore’s cameo as a frustrated news anchor is fun.

Sanjeev Reddy does well until he stays loyal to the original script. There are some good moments in the first half. However, his direction goes haywire in the second half where politics take the front seat. He has failed to give an emotional core to the film that falls flat during the key climatic portions.

Except Mella Mellaga other songs are passed. Background score is out of sync in many scenes. Cinematography is alright. Editing could have been better in the second hour. Production values are not up to the mark. However, the producers couldn’t do much keeping Sirish’s market in their minds.

Few comedy bits in the first half

Second half is a letdown

ABCD has a nice premise that sets it apart from the regular entertainers. Two spoiled brats coming to India and forced to live the slum life has enough material to become an enjoyable comedy. Despite a promising premise, ABCD only offers handful of laughs and shines only in parts. The political thread runs parallel to the main plot and that is not developed in an interesting manner. The choice of actor for playing the main villain also comes in as one of the major drawbacks for ABCD.

Even the romantic thread between Sirish and Rukshar is underdeveloped. There is not enough meat in the love story to make the proceedings interesting. It is hard to root for the main characters that are not developed properly. There is not a moment where we as audience wants the hero and his friend to win and go back to America. While the first half is passable in spite of an uninteresting screenplay, the second half falls flat on its face due to poor sequences involving ‘Youth Icon’ contest. The villain is hardly threatening that takes away the tension from the drama.

Climax is very predictable as the movie ends on an expected note. However, scenes leading to the climax are not convincing enough. Everything happens abruptly as if the makers were in a hurry to wrap it up. ABCD which starts off as an interesting comedy, unfortunately, ends up as an undercooked drama that gives life message to the youngsters. It has little scope to perform at the ticket windows too.