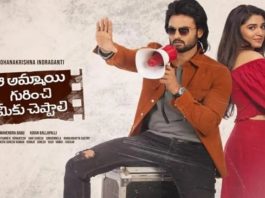 After delivering a sweet and memorable film like ‘Sammohanam’, the duo of Sudheer Babu and Indraganti Mohan Krishna came together for ‘V’ which ended up as a huge failure. They teamed up for the third time for a movie titled ‘Aa Ammayi Gurinchi Meeku Cheppali’ which revolves around the film industry. The trailer and songs created a lot of curiosity among the audience and film lovers are expecting another soft romantic entertainer with touching emotions. Let us wait and see how the film turned out.

Naveen (Sudheer Babu) is a super successful young director in the film industry. He scores successive hits with complete commercial entertainers but gets floored by watching a beautiful girl’s showreel. He decides to make a female-oriented movie with her as the main lead. He searches for her everywhere and finds out that she is a doctor named Alekhya (Krithi Shetty). She and her parts hate the movie field and there is a strong reason for that. What is that reason? Will Naveen convince her and her parents? Where will this journey take Naveen and Alekhya? All these questions will be answered in the movie.

There are a few films that do decent business in theatres and go away without making any noise. But the sheer brilliance in that movie will get noticed later when people watch it again on television or on OTT platforms. People then feel sad for missing such a movie in theatres. They start talking about why the film did not get the applause it deserved. ‘Sammohanam’ featuring Sudheer Babu and Aditi Rao Hydari in the lead is one such film. Directed by Mohan Krishna Indraganti, this film got a lot of appreciation after it was made available on the internet. Some even call it a classic love story though it was a bit inspired by ‘Notting Hill’.

With the same director and hero making a movie set in the backdrop of film world once again, people started to raise their expectations. They dreamed of a film with strong characters, beautiful moments, nice story and a tight screenplay. While ‘Sammohanam’ feels natural, ‘Aa Ammayi Gurinchi Cheppali’ lacked the magic and appear as an imitation of their previous flick. While Indraganti tried to narrate a different story to the audience, the dull screenplay, serious scenes and slow proceedings bogged down the film. The first thing you expect from a love story is beautiful chemistry and magical moments between the lead pair. They are the biggest asset of ‘Sammohanam’. The strong characters and the drama between them made the film special. But the chemistry between the lead pair in ‘Aa Ammayi Gurinchi Meeku Cheppali’ did not work out and there is not one magical moment in this film.

While the conflict point is good, the way it was presented is not impressive. Our hero who is a director is adamant on making the girl as her heroine. The girl has a strong reason to keep him away but accepts his offer after getting a realization. The main point revolves around the reason for the girl hating the movie field. The entire story revolves around it. This is a serious issue and with tragedy involved, the screenplay moves at snail pace with heavy scenes.

Indraganti is known for injecting situational comedy in a serious story. But he relied on emotions and drama this time. Like the hero character says, they focused on the emotion and ignored the entertainment. Till the interval twist involving the heroine, the film runs on a flat note without any ups and downs. While a few satires on the happenings in the cinema world bring out a few smiles, the story doesn’t move forward. Despite not being necessary for the story, the emotional scene involving the hero is the only special scene that stands out in the first half.

While the twist for the heroine’s character looked good, the flashback portions are very predictable. The sad flashback scenes are dragged a lot. The scenes involving Avasarala Srinivas provide a bit of relief but the story fails to make any impact. The director did not make any effort to establish the bonding between hero and the heroine. We don’t get a feeling that they are in love. The scenes involving the heroine and her parents give you a TV serial vibe. The melodrama goes overboard in these scenes. The last scenes showcasing the screening of the hero’s film with heroin are dealt well. It does make you emotional. But the rest of the proceedings which tested your patience till then ended up as a big minus. Overall, it is not a film of Indraganti’s standard.

Sudheer Babu showed a lot of maturity in this film. His controlled action in many places worked well. But his character is not as lovable as ‘Sammohanam’. He did a great job in an emotional scene during the first half. Krithi Shetty leaves you with mixed feelings. She looked very cute in some scenes while looking too ordinary in others. Compared to her previous films, she gave a better performance this time but pales in comparison to Aditi Rao’s acting in ‘Sammohanam’. Vennela Kishore provided some laughs while Rahul Ramakrishna did not get a lot of scope to perform. Srikanth Iyengar is decent while the other actors are okay.

Music is very crucial for a love story and Vivek Sagar disappointed with songs once again after ‘Ante Sundaraniki’. Though they sound good while viewing the film, nothing stands out. His background score is good as expected. PG Vinda’s cinematography is wonderful. The visuals look great and the production values are adequate. Writer-director Mohan Krishna Indraganti went back to his comfort zone after failing badly with ‘V’. But he failed to reach the standards set by himself. This love story from him lacked the magic and his mark beautiful moments.