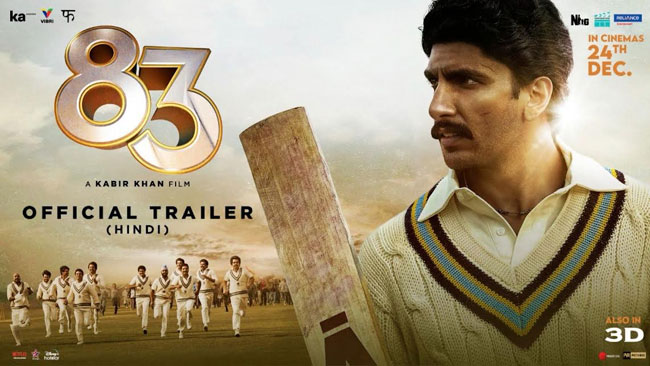 The trailer of 83, a biographical sports drama featuring Ranveer Singh, Jeeva, and others in the lead roles was unveiled a short while ago and it has struck a chord with the audience now.

The trailer captures all the right emotions and implies that 83 is a winning sports drama based on real life incidents and there is a fair deal of emotional connect attached to the same.

This has to go down as one of the finest trailer cuts in recent times. The emotional connect, the wittiness, and the cricketing action are bang on point.

Ranveer Singh will be seen as Kapil Dev in the film which also features Deepika Padukone. The film is directed by Kabir Khan.

Well-made biographical sports dramas always enjoyed great patronage in the Hindi theatrical market and the same might be the case with 83 once it hits the silver screens. The film will be releasing in theatres on the 24th of December.