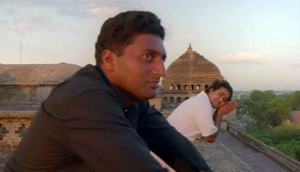 About 22 years back versatile actor Prakash Raj featured in director Mani Ratnam’s ‘Iruvar’ which was mostly based on the legendary MGR and Karunanidhi’s lives. Prakash Raj played the role of Karunanidhi and his performance was rated as one of the best.

In 2019, Prakash Raj is going to reprise Karunanidhi yet again and this time it is in the biopic of Jayalalithaa. Bollywood actress Kangana Ranaut is playing the title role and recently Aravind Swamy was confirmed for MGR role. Now the makers are said to have zeroed on Prakash Raj for Karunanidhi’s role.

The Tamil Nadu politics were mostly dominated by three names and they are MGR, Karunanidhi and Jayalalithaa. If a biopic is made on any of three persons, the other two will certainly have space in it.

It’s rare opportunity for an actor to play the same role after two decades. Prakash Raj is highly regarded actor in the south Indian industry and we are sure that once again he will live in the character and give a stunning performance.