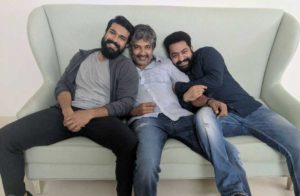 When Rajamouli announced #RRR, everyone was excited and the excitement continues even today, but the biggest doubt that is lingering in the minds of many people is, how the director is going to handle the all-time rival Mega and Nandamuri fans. But the director has a superior answer to this.

“Whenever two big heroes come together, say if we could see Spiderman and Superman together, it gives a nice feeling. That’s the reason why I though Ram Charan and Jr NTR should come together for this film” says Rajmouli, explaining what prompted him to work out this combination. But he says, he knows about the traditional rivalry between the fans of both these stars.

“Though they hail from two different traditional families whose fans have a rivalry, their coming together will surely give a wow feeling. Firstly they are very good friends and that helped me pull through this very easily. As I’ve worked with both previously, it’s not a tough task for me to handle both” says Rajamouli, adding that more than rivalry, now fans will enjoy a new dimension of these stars.

Also, Rajamouli is planning in a way that the ‘rivalry’ will be toned down by promotions of the movie. “That’s why I’ve made the first look of Ram Charan’s character have Tarak’s voice. It’s my way to ease the rivalry and make them enjoy the content”, he says, exuding confidence that, “fan rivalry won’t affect #RRR in any way”.