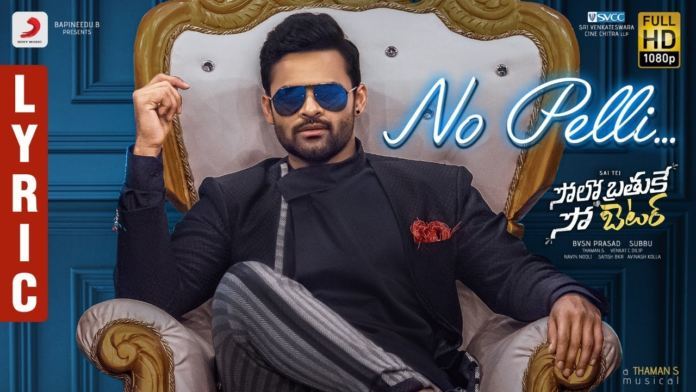 Sai Tej has scored back to back hits in 2019. This year Sai Tej is playing lead role in the movie Solo Bratuke So Betteru which is being directed by debutante Subbu. This movie is originally scheduled for release on May 1st but it was now postponed indefinitely. Major part of the film’s shoot has been completed and the team is eagerly waiting for lock down to get lifted.

Though in lock down, team SBSB has now released the film’s first single No Pelli a while ago. It is quite commendable that they could pull it off in these circumstances. Coming to the song, it has some catchy lyrics which will attract first. Raghuram has written it and he has a bright future.

SS Thaman who is flying high with successful chart busters has delivered yet again. The song will instantly connect to the audience, youth especially. Armaan Malik has added flavor to the song with his voice. This song has additional glamour with Varun Tej and Rana Daggubati were seen too. Visuals are special attraction for this song too with the current situation of lock down taken into account.

Overall No Pelli from Solo Bratuke So Better is the best start one can expect.