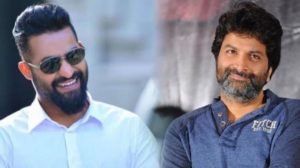 Young Tiger Jr NTR is one of the finest actors in Tollywood. Every director wishes to work with him. He was last seen in the film ‘Aravinda Sametha’, which was directed by Trivikram Srinivas. Now, Trivikram and Tarak are gearing up for another movie which is tentatively titled #NTR30.

According to the reports, the film will go on floors by the end of the next year. It seems like Trivikram is busy finalizing the rest of the cast and crew. The latest we hear is that Trivikram is planning to rope in veteran actress Ramya Krishna for an important character in the movie. She will be seen in a powerful role.

She started her second innings with Baahubali and there’s no turning back for her. She is growing as a successful actress. More details about her role in the movie are awaited.

Currently, Jr NTR is occupied with ‘RRR’ where he will essay the role of Komaram Bheem. Rajamouli is the director of the flick and the grand celluloid also stars Ram Charan. The film is being made on a lavish budget of Rs 350 cr and is bankrolled by Danayya. The film is expected to hit the screens sometime in 2021. Stay tuned to Sakshi Post for more updates.