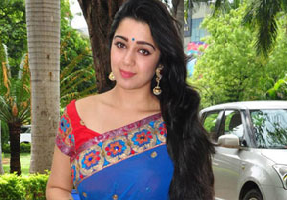 Chamrmee has bagged the image of dynamic beauty. She has been the close associate to Puri Jagannath in professional front and plays vital role in the production of every film that comes from Puri Connects. She is the CEO of that banner.

She made a big fortune with iSmart Shankar and now busy with the film Fighter in pan India scale.

She had an exclusive chitchat

You have started your production activities with Jyothi Lakshmi. Didn’t you feel dejected after the result of that film?

No. I enjoy this work. If it’s an actress’ job, focus will be on costume, make up and fitness. But production is not like that. There will be many hiccups. There will be an everyday run. I love this. I enjoy the kick in it.

Film industry, being a male dominated one, never made you uncomfortable?

Here the terms will be very clear. I want something. I will pay you this much. If you don’t deliver as per the requirement you will be out of the project. That’s it. There is no question of any dominations.

How did you get this business mind? Is your family into business?

Yes, from my family. My father used to take me to our factories in childhood. I started loving business since then.

What’s after Fighter and Romantic…?

There are many. Puri Jagan garu has a big bank of scripts. We have a thought of doing some of them with new directors. We also have the idea to make web series. There are two big films in pipeline after Fighter.

So, can’t we see you again on screen?

No. That is pakka. There are many new girls coming to the field with bundle of talent. During the time of Jyothilakshmi I wanted to announce that was my last film. But Kalyan garu told me not to announce, and keep away from acting if that’s the decision. So I kept quiet then. Now I am declaring. No more acting from me.

Has iSmart Shankar cleared all of your financial troubles?

It is not easy to make the money move from theatres to the producer. We need to do so many follow ups. I will tell about this off the record.

What are you doing in lockdown?

I am doing online courses. I had a long term dream to do some courses abroad. I am quenching that desire now. I am doing courses relating to business and screenplay writing.

Has Fighter got upset only due to Corona?

Yes. We planned many things right from foreign technicians and schedules. Everything is in hibernation now. First, health is important. We don’t have the thought of abruptly jump into shooting as soon as the lockdown is over. I think we miss this year totally, though we thought of releasing it in 2020.