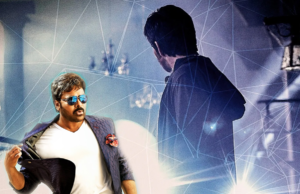 Already the theme of ‘Disco Raja’ is out that a dead guy wakes up after 35 years and he finds himself as a former don who now avenges the death of his loved ones. And this guy who belongs to early 80s doesn’t know about present day things. Here’s an interesting snippet that is exciting mega fans actually.

Inside the movie Disco Raja, the character played by Raviteja actually sees the poster of Megastar Chiranjeevi’s “Khaidi No 150” and gets excited. He says that Chiru’s super hit Khaidi is running since 80s to till date. And later when Vennela Kishore gives clarity that this Khaidi No 150 but not Khaidi, Raviteja says that Chiru’s charisma is pretty much the same even after 35 years.

A section of audiences might have got excited for the scene though we have seen many such praisings of Megastar in many movies including Ala Vaikunthapurramuloo recently where Bunny talks about ‘Peddaayana song’ and dances to Abbani Tiyyani Debba. In the wake of Disco Raja getting negative talk, will this mega-praising scene helps to attract mega fans is something we have to see.